What Hollywood Can Teach Us About Environmental Studies

Sometimes unconventional sources of inspiration can launch us onto exciting educational journeys. Have you ever considered a career in environmental science? Maybe not. But chances are you were inspired by a popular film with unexpected environmental undertones. Dystopian and science fiction films are quite popular these days. Often, these films will explore themes of environmental apathy, industrialism, resource scarcity or ecological collapse.

To underscore the importance of sustainable thinking and environmental studies, here is a short selection of films with a strong message of accountability.

Love documentaries? In this powerful Canadian one, directors Elliot Page and Ian Daniel explore the harmful impacts of environmental racism. The documentary follows Page as he travels around the province of Nova Scotia, visiting rural spaces affected by toxic industrialism. The documentary elevates the voices of local activists and Indigenous water protectors who are leading the charge to defend their natural land. What can the film teach us about environmental studies? The documentary is a clear reminder that environmentalism should be rooted in equality and listening to the voices of marginalized or racialized groups and Indigenous land protectors.

In this visually stunning film, a group of daring explorers must venture across space and time to ensure the survival of the human race. The film features a host of talented actors including Matthew McConaughey, Anne Hathaway, Jessica Chastain, Michael Caine, Topher Grace and Matt Damon. The backbone of the narrative is a beautiful relationship between father and daughter, but the central theme is environmental harm and the fight for survival. Interstellar shows us a dying planet hit by a devastating plague. The characters must fight against crop shortages and unbreathable air. Although the plague was a natural occurrence, it does give us an ominous glimpse at a potentially unlivable home planet. Such a world could just as well be caused by environmental harm, industrialism and human error. The main characters spend most of the film in search of another livable planet, which reminds us just how miraculous and remarkable our home planet is.

Perhaps you are familiar with The Road, an acclaimed novel by Cormac McCarthy. This film adaptation asks us to think about what would happen if our biosphere were to collapse. How would we survive? What would happen to humanity? To civilization? The narrative is driven by a fight for survival in an inhospitable world that could one day be ours. The film also has a brilliant cast featuring Viggo Mortensen, Charlize Theron, Kodi Smit-McPhee, Robert Duvall and Guy Pearce.

Continuing with the trend of popular dystopian narratives is The Matrix by Lana and Lilly Wachowski. What connects it to environmental science? The worldbuilding of the film is based on the disturbing idea that mankind will harm nature in pursuit of an end goal. In the world of The Matrix, humanity fought against machine takeover by blotting out the sun, scorching the sky and creating a nuclear winter cloud. The goal was to block off solar power to machines, but the result was an ecological disaster and the collapse of civilization. This backstory is further fleshed out in the Animatrix, an animated collection of short vignettes written to go with and expand on the worldbuilding of the original film. Essentially, machines gained power and end up harvesting humans as a power source, lulling them into peacefulness with a cyber reality known as the Matrix. The real world is left in disarray with pollution drowning out all sunlight. The remaining survivors and those who escape the Matrix live underground as part of the resistance effort. Starring Keanu Reeves, Laurence Fishburne and Carrie-Anne Moss, this dystopian film is a cautionary tale about what happens when humanity will go to any lengths, damaging the environment to reach an end goal.

How could a superhero movie possibly be related to environmental studies? We are glad you asked. Avengers: Infinity War is an unexpected example of what happens when environmentalism goes off the rails. Thanos, the central villain, is driven by core issues relating to resource scarcity and environmental destruction. No sensible environmentalist or land protector would advocate for his destructive response plan, but the film does force the audience to engage with challenging questions around how to navigate a lack of resources. This is a very real problem of concern for modern society. 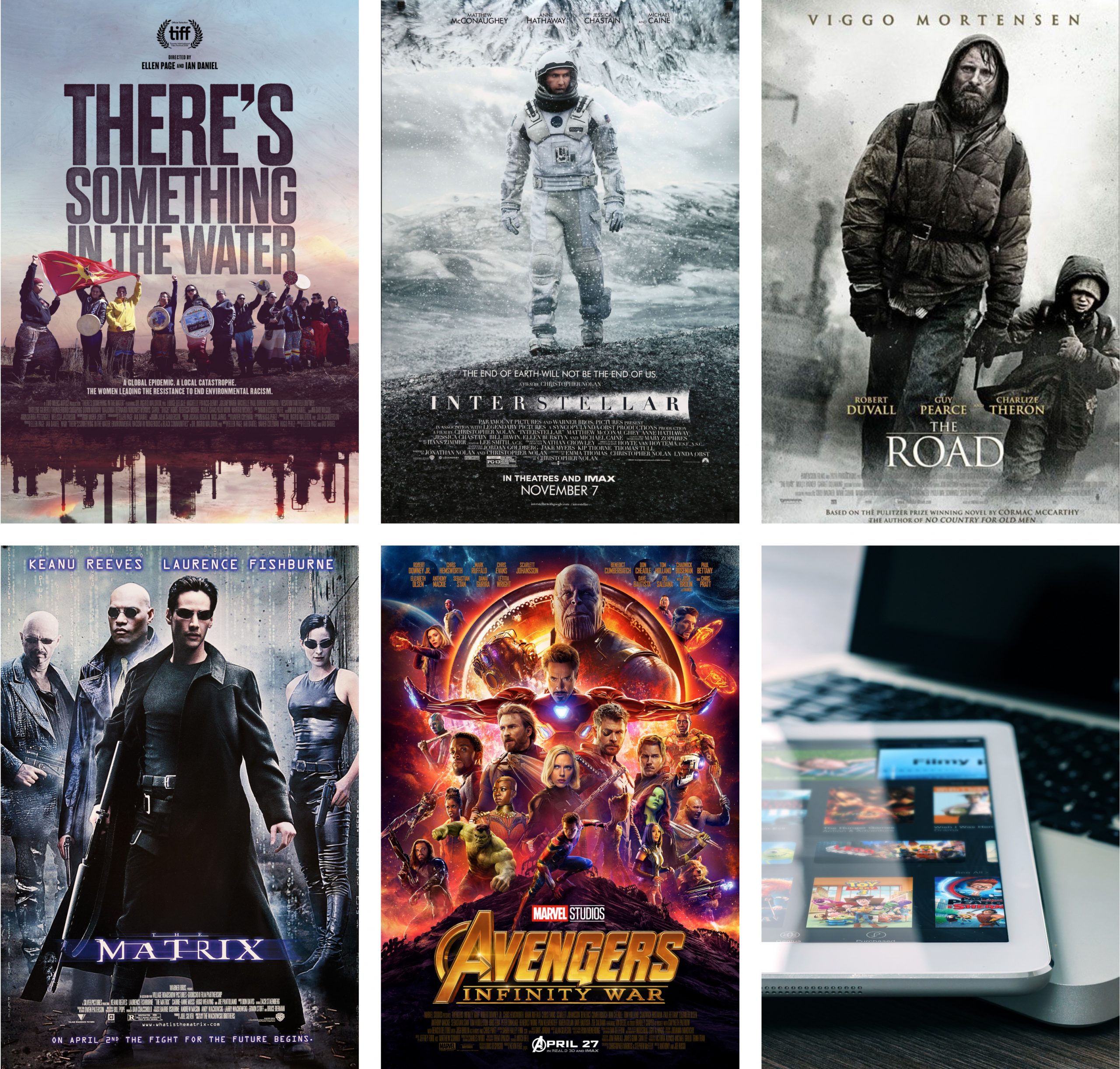 Environmental consciousness is the key to a bright future and the survival of humanity. Take inspiration from wherever you can find it. Have fun exploring your continuing education options in sustainability and environmental science. Whichever path inspires you most, make sure that your educational choices are rooted in racial equality, accountability and practical science.