Trump, Towers and Tolerance: Our Take on the Naming Controversy of Our Next-Door Neighbour

Donald Trump has become arguably the most controversial figure in contemporary US politics. Though Trump has amassed a staunch right-wing support base and currently leads the Republican primary polls by nearly 15 points, he has drawn significant criticism for his policies and vehement ridicule for his antics, ranging from his proposal to temporarily ban all Muslim immigration to the United States to his unflattering impressions of a disabled reporter at a campaign rally.

Trump has become an extremely polarizing figure in the United States, and recently his controversy has migrated north to Canada – in fact, to the very same city block as our Ashton College campus in downtown Vancouver. We occupy the same block as Trump Vancouver, an elegant, mixed-use residential-hotel skyscraper that will be the second-tallest building in Vancouver upon its 2016 completion. The project has come under fire from many Trump critics who assert that the brand now symbolizes xenophobia, ignorance and intolerance.

Let’s quickly make one thing clear: Donald Trump may provide branding, but he is not responsible for building his eponymous Vancouver tower. Before becoming such a tremendously divisive political figure, Trump helped to revolutionize the industry through spearheading the development of luxurious mixed-use condominium properties, a building style that has since become synonymous with downtown Vancouver. Today, Trump makes his millions by lending his luxury brand and reputation to building projects across the world, including Trump Vancouver, which was actually developed and constructed by the Vancouver-based Holborn Group. 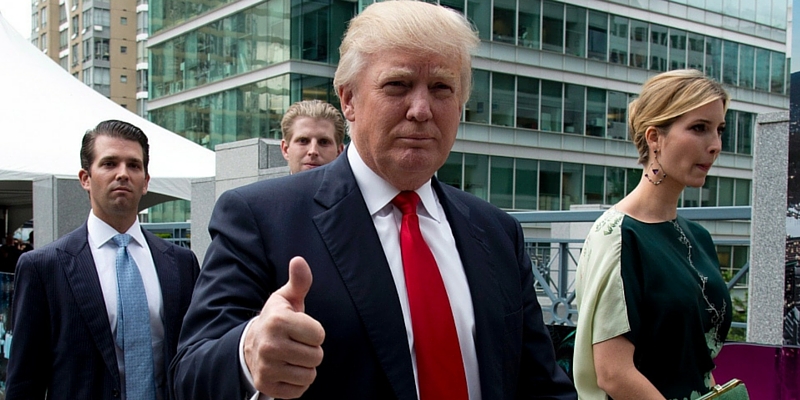 Donald Trump gives the thumbs up as he leaves an announcement with sons Donald Jr, Eric and daughter Ivanka in downtown Vancouver, B.C. Wednesday, June 19, 2013. (Jonathan Hayward / THE CANADIAN PRESS)

So, Trump is associated with Trump Vancouver in name only, but here’s the problem: in recent months, the Trump brand has become corrupted by his procession of increasingly radical suggestions, assertions and proposals, particularly with regard to immigration and multiculturalism. During this past summer, Trump targeted Mexican immigration to the United States. He accused the Mexican government of sending “the worst elements in Mexico” to the United States, asserting that most members of the Mexican diaspora are responsible for bringing drugs, murder, rape and infectious disease to the United States. Presently, Trump has shifted focus to Muslim immigration, primarily in response to the Paris terrorist attacks and San Bernardino shootings. Trump has proposed a temporary total ban on all Muslim immigration and refugee migration, and he supports the creation of a government database for tracking and monitoring US Muslims.

These stances have generated approval among a substantial portion of US voters, but many here in Vancouver argue that the racism now associated with the Trump brand should have no place in the city skyline.

At Ashton College, we absolutely condemn the xenophobia promoted by Trump and his supporters. However, we cannot help but notice the irony in the fact that our campus shares the same block as the Trump Vancouver tower. Since our inception, Ashton College has been tremendously proud to have helped countless individuals of any religion, ethnicity and nationality gain a foothold in Canadian society through education. Our President has stated that we pride ourselves on diversity, and we believe that multicultural tolerance, collaboration and celebration improves all institutions, from our college to our country. With the comments of Donald Trump and his supporters in mind, we can only wonder if, or to what extent they might agree. How would Trump and his supporters respond if they knew that Trump Vancouver shares the same block as Ashton College, an institution committed to providing everyone with an equal opportunity for success in Canada regardless of their personal background or situation? At Ashton College, we’re considering the more complicated side of that question: what does it mean to share the same space and city as a development branded with values so opposed to our ideals of diversity, tolerance and equal opportunity?

These grand societal questions are difficult to grapple with, and we don’t have an easy answer. However, we will continually maintain and affirm our commitment to helping anyone succeed in Canada by delivering innovative, real-world education and a positive experience from first encounter to graduation and beyond. As for Trump Vancouver, the Holborn Group has stated that its relationship with the Trump brand will continue, and as for Trump himself, we can only hope that enough Americans share our respect for diversity and tolerance to prevent him from winning the upcoming federal election.