I became a landed immigrant in January 2013 and was admitted to Ashton College shortly after.

It was wonderful to be admitted during my first year in Canada because I know not all new immigrants are able to begin their education so quickly, so I felt very lucky that I was able to begin building my career as soon as I arrived.

In Persia, I was self-employed and worked in the travel and tourist agency, where my fluency in three languages (Persian, Spanish and English) served my well. When I came to Canada I knew I wanted to work in an industry where I could continue to interact with people from different cultures and backgrounds, so the Immigration Consultant Diploma Program was a great option for me.

After completing Ashton’s full-time IMCD program in July 2013, I began working as a Program Assistant for ISSofBC, a non-profit organization that serves the settlement, training and integration needs of newcomers from all over the world. 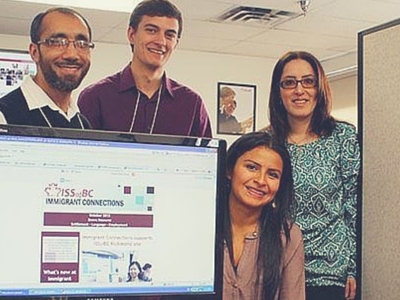 Somayeh (far right) poses with co-workers at the ISSofBC office.

I completed Ashton’s ICCRC Exam Prep Course in October 2013 and after passing the Immigration Consultants of Canada Regulatory Council’s Full Skills Exam, became a Regulated Canadian Immigration Consultant. I then founded my own consulting firm, Silk Road Immigration and Investment Consultants Inc. with an office located just down the road from Ashton College at Canada Place. Silk Road Immigration provides Canadian immigration services to a wide array of clients from across the world who would wish to make Canada their permanent home. Because I know how lengthy the process of immigrating to Canada can be, Silk Road is focused on getting clients to Canada in the shortest possible time. 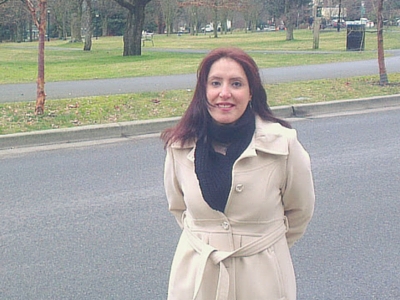 When I look back at my time at Ashton, what stands out most is the dedication and professionalism of my instructors and the Ashton staff.

I think the experienced instructors are the most important factor that would distinguish Ashton from other colleges offering similar programs.

The program was wonderful for me because my adviser (Carolyn Williamson) was very kind to me, she guided me through the application process and supported me throughout the program. I was overwhelmed in the beginning because I was a brand-new immigrant and I was starting a new academic program (and career) so having Carolyn there to guide me through the process was incredibly helpful.

This diploma changed my position here in Canada as a new immigrant. Many new immigrants to Canada have to apply for transitional jobs that they may be overqualified for, but I got my license and started my own business so quickly; it was a dream come true.”