Lest We Forget – Understanding Remembrance Day in Canada

On Sunday, Remembrance Day will be honoured throughout Canada. While it is a statutory holiday, Remembrance Day is far from a party. It is an observation of freedom, thankfulness and history and something all Canadians should be aware of. It is a commemoration of the more than 2,300,000 Canadians who have served during peace, conflict and war and an honouring of close to 120,000 lives lost in service.

The first observation of what we call Remembrance Day was in 1919 in all British Commonwealth countries. It was to celebrate the end of the First World War and commemorate the armistice agreement – thus, was originally called Armistice Day. Until 1930, Armistice Day was a floating holiday, like Mother’s Day or Easter, and was celebrated on the Monday of the week when November 11 fell.

In Canada, in 1931 a bill was passed to observe Armistice Day only on November 11 (with two minutes of silence taken at the 11th hour of the 11th day of the 11th month, when the armistice agreement marked the end of the war) and the name was changed to Remembrance Day.

Poppies are perhaps best known because of their mention in the 1915 poem In Flanders Fields written by John McCrae who was a doctor serving with the Canadian Artillery. It is believed that McCrae wrote the poem after performing the burial service for his friend Alexis Helmer who was killed on May 2, 2015.

In Flanders fields, the poppies blow
Between the crosses, row on row,
That mark our place; and in the sky
The larks, still bravely singing, fly
Scarce heard amid the guns below.

We are the Dead. Short days ago
We lived, felt dawn, saw sunset glow,
Loved and were loved, and now we lie
In Flanders fields.

Take up our quarrel with the foe:
To you from failing hands we throw
The torch; be yours to hold it high.
If ye break faith with us who die
We shall not sleep, though poppies grow
In Flanders fields.

It was the poppies growing among the rubble and gravesites that inspired the poem and the small red flowers continued to thrive in the soil of France and Belgium (Flanders is in Belgium) which is rich in lime from the debris and rubble of the First World War. The poppy became widespread throughout Europe as a result.

The flower is officially known as a red field or corn poppy and can still be found growing wild on edges of farm fields and roads in Northern France and Belgium. 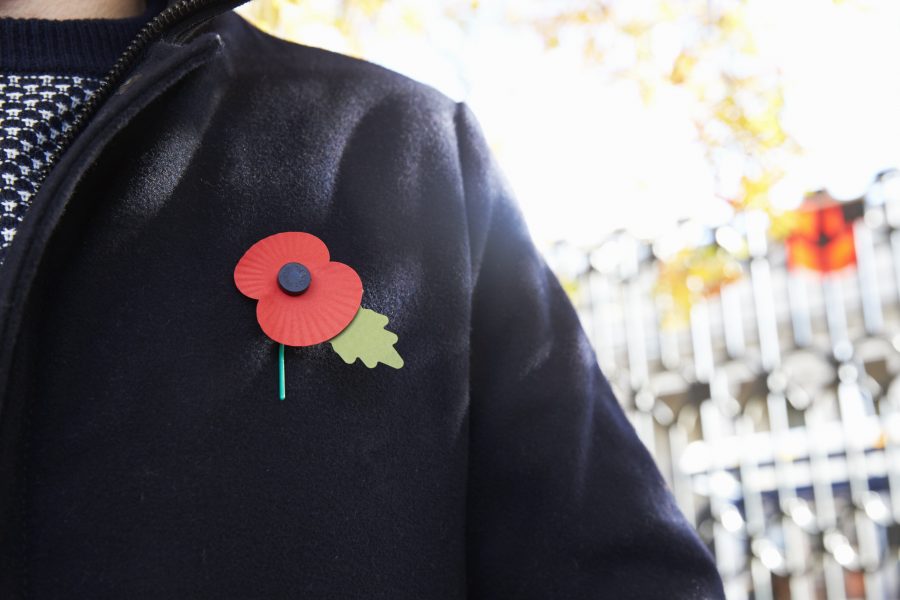 The Poppy as a Memorial and Fundraiser

Two women, Madame Anna Guérin of France and American Moina Michael, campaigned for many years for the red flower to be used to raise funds for those suffering as a result of the First World War. The process of making cloth poppies to raise funds for war-torn regions began in 1918 in France. Handmade poppies made their way to North America in 1921.

Michael wrote the book The Miracle Flower – the Story of the Flanders Fields Memorial Poppy as well as a response poem to In Flanders Fields called We Shall Keep the Faith. She pinned a poppy to her left chest in 1918 (where it should always be worn – close to the heart) and had soldiers come to her for poppies. Very quickly, veterans organizations began to adopt the symbol of remembrance and by 1922, 14 organizations had adopted the poppy as their emblem.

Guérin came to Canada in 1921 and the Royal Canadian Legion (then the Great War Veterans Association of Canada) agreed in July of that year – at Guérin’s prompting – to adopt the poppy as a symbol of remembrance. The two women worked with great dedication to increase the fundraising efforts to support the needy, such as widows, orphaned children and veterans through the flowers and to ensure the poppy became a symbol to honour those who gave much for freedom.

The humble red poppy now serves as one of the Royal Canadian Legion’s most important programs. Money from the Poppy Campaign assists veterans in a variety of ways.

It isn’t just British Commonwealth Countries that take time to honour those who have served. However, 54 Commonwealth countries (including Canada, the United Kingdom and Australia) mark their observation on the 11th hour of the 11th day of the 11th month. France, Belgium and Poland also observe Remembrance Day on November 11. Other Commonwealth countries honour servicemen and women on different days. In South Africa, Poppy Day is held the Sunday closest to November 11, while in New Zealand, April 25 is Anzac Day (Australian and New Zealand Army Corps). The United States also observes November 11, but calls it Veterans Day.

The Commonwealth War Graves Commission (CWGC) cares for the graves of 110,355 Canadian men and women who died during the First and Second World Wars on behalf of the Government of Canada. Veterans Affairs Canada (VAC) takes care of those grave markers that fall outside the time of the CWGC dates for “war dead.” There are more than 200,000 Canadian Armed Forces members who died outside of these time periods who have their graves maintained by VAC.

In Canada, the national Remembrance Day ceremony is held at the National War Memorial in Ottawa. This is attended by the Governor General of Canada, who leads the ceremony, the Prime Minister, government officials, veteran’s organizations’ dignitaries and the public. It begins at 9 a.m. local time and runs until noon with a wide range of activities designed to honour those who have served as well as to inform the Canadian public of what those individuals gave to their country.

Veterans join in a veterans’ parade at the national event. Visitors have the ability to pay respects to those who gave up so much for the peaceful way of life we enjoy in Canada.

Ceremonies are held across the country in a variety of places. The best source for accurate information on those ceremonies is the regional branches of the Royal Canadian which can be found through the national legion site at legion.ca.

Be sure to participate in Remembrance Day. Wear a poppy. Take two minutes of still silence at the 11th hour on Sunday.