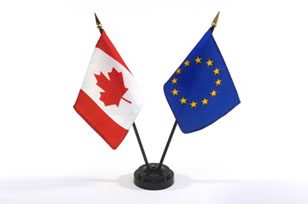 The European Union (EU) is the biggest player on the global trading scene and remains a good region to do business with because of its diverse make-up. Europe has become deeply rooted into the global market due to the ease of modern transportation and communication. European companies of every size are now able to seize the opportunity to trade outside of the EU with the 28 member union accounting for 16% of the world’s imports and exports.

Canada is in talks with the EU to enter into a partnership similar to the North American Free Trade Agreement (NAFTA). Aptly named the Comprehensive Economic and Trade Agreement, CETA is expected to go into effect in 2015. The agreement will give the EU’s 500 million consumer market access to the Canadian market. Likewise, Canada will now have free access to almost 30 new markets which is unprecedented.

Some in the business sector worry that Canada will become inundated with European products. These concerns are not without warrant, but the potential for Canadian gains is much greater. The long-term potential for Canadian manufacturers and exporters are vast because Canada will no longer have to continually rely on the US market which has been plagued by economic setbacks and political squabbles over international goods.

After going through a round of elections in May of this year, the political climate of the EU has recently shifted towards the right with Eurosceptic parties gaining ground in the European Parliament. This outcome means that anti-EU parties have more say. This new shift in politics has caused some uncertainty where CETA is concerned as the EU’s new power-base becomes less certain of its direction to move international or focus on more localized interests.

Experts, however, seem to agree that CETA will move forward in 2015 with the CBC reporting that a full report on the agreement will be released mid-September. Ennio Vita-Finzi, former Trade Commissioner and President of the Canadian Council for the America’s during the NAFTA negotiations, argues that while it is important to look at both sides for and against trade agreements at the end of the day, business is business. In a recent article for Trade Ready, Vita-Finzi contends that, “It does not take a cynic to understand that in today’s world the words ‘bottom line’, ‘increased market share’ and ‘profit’ will eventually overcome philosophical, environmental and idealistic arguments, however right and credible they may be.”

The bottom line is that this agreement will help importers and exporters on both sides of the Atlantic opening new and previously un-tapped markets.