How Sensors Have Made Robots More Human

When manufacturing facilities first implemented machinery capable of performing the same task over and over, people began to wonder if the world would be overrun by robots. Would everyone be put out of work? Imagine their wonder at how far robotics have come, due in no small part to sensors that make them capable of “seeing, touching, smelling” and more. Despite how far they’ve come, robotics still works in tandem with humans and while many human tasks have been replaced over the years, there is always a need for the human element. 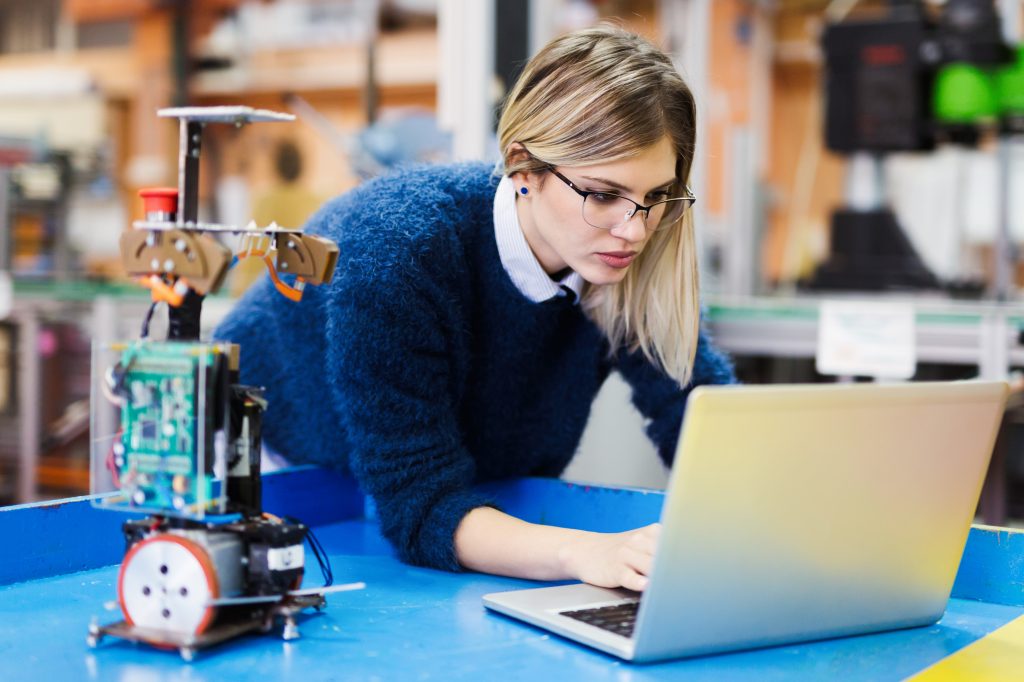 Henry Ford launched the first moving assembly line to create cars back in 1913 – more than 100 years ago. It featured ropes and winches that pulled the car chassis along which is a far cry from what we think of as a robot today, but it took the time to make a car down from 12.5 hours to just 6. Compare that with today’s automotive manufacturing floor of about 500 robots per plant mixed with the human workers who do light assembly work, quality control and testing. In 2012, a Ford plant introduced robots with laser-guided “vision” and suction cup “hands”. This allowed the robots to sense placement of certain objects and make the minor adjustments necessary without human intervention. Ford saw this as a way of eliminating heavy lifting and undesirable jobs from employees.

Sensors and How They’ve Paved the Way for Robotics

Robotics training will cover a lot of information about sensors. Sensors are the way to control a robot and an introductory robotics course will explain ways to enable sensor function. Think of sensors as a robot’s equivalent to a human’s five senses, like in the Ford plant, the “vision” and “hands” are controlled by sensors. We humans have sight, hearing, touch, taste and smell senses. In a robotics course, students learn about how robots can mimic these senses to do a certain job. Though, the desire to have robots taste things is not really necessary quite yet.

Robots can sense the humidity in the air, which would be a form of touch, although a much more sensitive and informed version than that of a human. With this information, they can inform weather reports and help provide necessary advisories because they will be connected to the data and analysis tools that make this possible in an instant. This is where robotics training is a wonderful form of education: when humans can work with robotics and create helpers that fulfill tasks that humans don’t want to or can’t do. Sensors must be implemented in ways that allow the robot to perceive their environment and fulfill the task they are programmed to complete. Seldom do these kinds of “task-oriented” robots take on a droid or human-like appearance. Instead they are built to be function-based.

By looking to the different ways a robot can sense, humans can apply their robotics training to enhancing capabilities. Obviously, over the decades that robotics courses have been offered, sensors have increased dramatically in both their sensitivity and their functions. There aren’t droids walking among us or serving as our house-butlers yet, but some who have robotics training claim it’s simply a matter of time.

One example of robotics training in action is the Fraser Valley regional Library’s offering of Ozobots. These palm-sized orb robots allow kids to learn about coding, computational thinking and digital exploration. With special coloured markers, kids create paths for the Ozobots on paper and also work with various colour codes that signal the bots to change their speed, direction or LED light colour.

Once these marker-basics are mastered, kids can then explore drag-and-drop style coding on tablets set up for the bots, to give the robots more advanced instructions and programs. It’s the ideal way for kids in grades four to six to learn about robotics and embrace robotics training in a fun, playful way at their local library.

Even in food, robots are helping humans. Many packaging lines include metal detection, colour identification and shape sensors to flag food that may be contaminated, have contaminants in it or be deformed. Everything from frozen food packaging to eggs makes use of pre-programmed robotics complete with sensors to identify variables that are often not visible to the human eye. Not only are robots making human food safer, they are also reducing tedious labour requirements.

Also within the agricultural field are companies like the Robo Weeder from Eleos Robotics. This fully-automated robot patrols fruit fields, like blueberries and vineyards, destroying weeds with a tiny microwave head. The multispectral computer vision allows the robot to determine what is a weed and what is a desirable crop. The robot also takes itself back to its station to be charged when the power is running low. It is truly an example of how a robot can be left on its own to perform mundane and unpleasant tasks.

Within the robotics field, there are eleven commonly known sensors. These are light sensors, sound sensors, proximity sensors, tactile sensors, temperature sensors, chemical sensors, acceleration sensors, pressure sensors, gyroscope sensors, current and voltage sensors and navigation and positioning sensors. Each one performs its own specific task and when several are incorporated into the same robot, they can accomplish significant work.

For example a robot with a chemical sensor essentially measures the chemical levels in a defined space. If this is incorporated with proximity sensors and temperature sensors, the robot would be able to report to any humans in the area if there are dangerous chemical levels. These may change with varying temperatures so the ongoing analysis of the temperature, chemical levels and proximity to humans would be integrated to create a single message: it’s safe or it’s not safe.

Alternatively, if we look back to the automotive example we started with, a robot needs pressure sensors to be able to pick up heavy and awkward items like a car’s windshield or hood. Proximity sensors would allow the robot to make adjustments as it begins to place the item, but pressure sensors keep the item in place without damaging it. Sensors give robots the ability to conduct a number of tasks that humans can do, but they also provide a number of services that humans can’t do and this is one way humans can make great use of robotics training in terms of increasing safety, eliminating difficult tasks and replacing workers better suited for other duties.