How many times has someone said to you, “Just relax, you’ll do fine,” before an exam? All you want to do at that moment is scream at them and tell them that you can’t relax and you feel like it’s going to be anything but fine. This is a normal response when you’re dealing with exam stress.

According to a survey conducted by ReachOut, an Australian national youth service, 2/3 of the 1000 young people interviewed (aged between 14 and 25) revealed that they experience “worrying levels” of exam stress; up from 51.2 per cent in 2017 to 65.1 per cent in 2018.

It’s easy to imagine that the results may be similar to students in Canada and around the world.

A much older, but equally-telling, Canadian study conducted by Ipsos in 2005 found that 40% of students had high stress with a further 8% saying they had extreme stress. There were no respondents in this survey who reported having no stress at all.

Several reasons contribute to this anxiety, including personal pressure to do well, expectations from parents and schools, worries about future employment, uncertainty about education paths, fear about finances and student loans, and the crushing demands of the world to be perfect. It all adds up and somehow comes down to how well a student does in a single test on a single day. Left unchecked exam stress can lead to withdrawal, anxiety and depression, uncontrolled crying and reactionary behaviour; even social anxiety and performance anxiety long after the exam is ancient history. 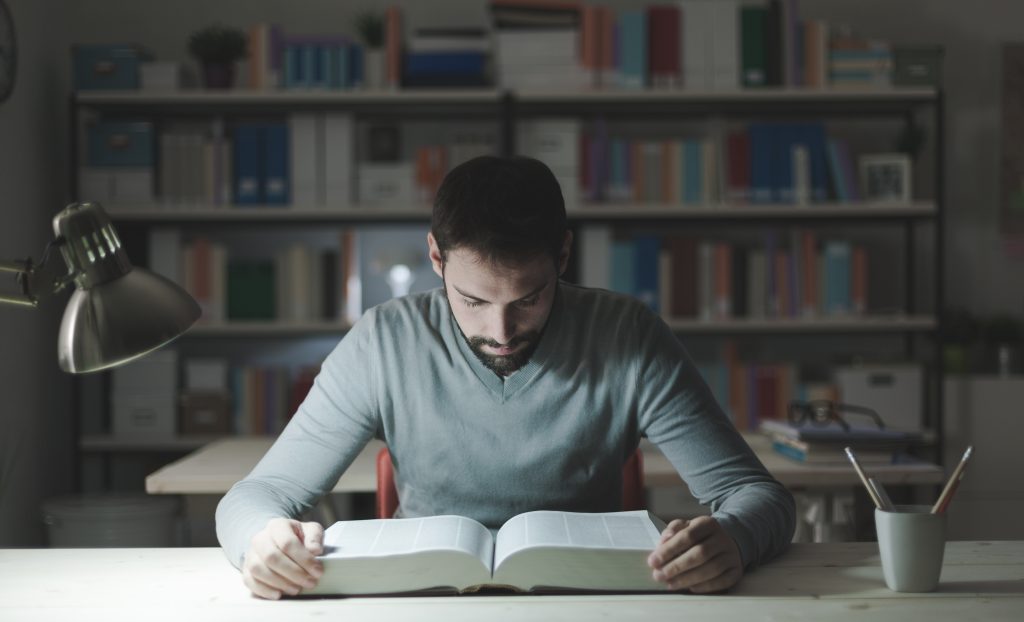 There are better ways to cope, manage and get ahead of exam stress so that it doesn’t have to rule your academic life or any part of your future. Here are some ways to avoid exam stress:

1. Planning
• Many students don’t see themselves as planners, and that’s okay. This isn’t about creating a colour-coded white board and adding more to your to-do list. That, in itself, is bound to create more stress. However, what you can do, in small chunks of time, is to create a study plan and jot down a few notes about what that looks like. You can often do this while you’re on the bus, standing in a lineup, or eating lunch.
• Think about what method of studying works best for you – how you have been successful in the past. Did you get better results when studying alone in a quiet room or when you worked together with others quizzing one-another? Did making outlines of the chapter work for you, or reading aloud? Think about the times your study habits worked and make notes of the times they didn’t.
• Consider the time you’ll spend studying. If the exam is about a week away, think about what that week looks like then give yourself flexibility in planning it out. Create blocks of time for studying. For example, you may decide that you’ll study for four hours on Monday between classes and two hours on Tuesday evening after dinner. Wednesday maybe a full day, but you’ll put in another four hours on Thursday, two hours on Friday; two, 2-hour blocks on Saturday and maybe three hours on Sunday. That’s 19 hours of studying! However, because it’s spread out, it doesn’t seem so daunting.
• Create a routine that works for you. Studying for four hours straight on Monday with no breaks isn’t going to be very effective, nor will sitting in front of the TV with a text book on your lap. Many people find the Pomodoro Technique to be effective where you work for 25 minutes at a time without giving into any other distraction, then take a break for five or ten minutes. Return from the break and start another 25 minute session.

2. Consider the things you enjoy doing and plan a few of them during exam week. Doing something fun, like bowling or lazing at the beach, or watching a move with friends can be a great stress buster. Moreover, because you know you have planning blocks scheduled, there is nothing to feel guilty about – for instance, you can skip studying on Wednesday nights because that’s the time you’ve kept for relaxing.

3. Don’t forget to move your body! When stress comes calling, we can get so caught up in the things we have to do that we don’t want to waste time exercising. You don’t need to spend an hour at the gym if that’s what you usually do. Perhaps you could go for a fifteen-twenty minute walk or a jog instead. It isn’t about “all or nothing,” it’s about doing some form of physical activity to release the cortisol that accumulates due to stress.

You can even turn on your favourite music and dance in the living room for 20 minutes or climb up and down a set of stairs. It will also help clear your mind and allow you to see things differently.

4. Put away drugs like caffeine, alcohol and others away during study week. The short term buzz of a Red Bull may seem like the thing to get you through studying. But although caffeine and other drugs give you a momentary high, there’s also a crash at the end of that high. You don’t want this imbalance in your mood during exams.

5. Manage your expectations of yourself. If you have never excelled at tests, don’t be so hard on yourself. Many exceptionally intelligent and creative people don’t do well when being tested in traditional methods. Give yourself a break and aim to do your best and leave the rest to the examiner.

Remember to maintain good sleep habits (going to bed and getting up at around the same time each day) and eat lots of healthy food (fruits, vegetables, lean meats or proteins) to keep your body healthy and your brain at its best state. Cut back on pop, candy and other high sugar foods as well as the processed things like donuts or packaged cookies.

Taking care of yourself first will allow you to take care of the exam better. Remember, when it’s too much to manage, seek help. There’s no exam in the world more important than your mental health.