Known as the Great White North, Canada comprises ten provinces and three territories. Canada is the second-largest country in the world and is one of the most desirable countries to live in, which may explain why it has one of the highest immigration rates in the world.

Host city to the 2010 Winter Olympic and Paralympic Games, the city of Vancouver is one of the most culturally diverse, temperate and scenic cities in the world, making it an ideal destination for study, work and play. 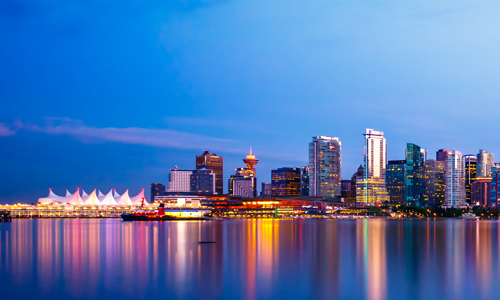 According to the Mercer Quality of Living Survey, Vancouver currently ranks in the top three cities in the world, judged on safety, education, health care, culture, environment, recreation, political-economic stability and public transportation. It has also been voted ‘the best city in the Americas' for three straight years by Conde Nast Traveler magazine and named ‘the world's most livable city' eight years in a row by The Economist Intelligence Business Unit. Further, Forbes rates Vancouver as one of the top ten cleanest cities in the world.

The mild climate of the city and proximity to the ocean, mountains, rivers and lakes make the region a popular destination for outdoor recreation. Vancouver has over 3,200 acres of parks, most notably Stanley Park, which is the largest. The city has several vast beaches, many adjacent to one another.

Vancouver is also renowned for its exceptional access to world-class ski and snowboarding destinations. Situated within a 30-minute drive from the downtown core are the North Shore Mountains. Also located close to Vancouver is the beautiful resort of Whistler, best known for hosting the majority of the Vancouver 2010 Winter Olympics and Paralympics.

Nicknamed ‘Hollywood North,' Vancouver is known for being a major film and television production centre. In 2008, the BC Film Commission reported that more than 260 productions were filmed in Vancouver, making it the third-largest film centre in North America after only Los Angeles and New York City.

For any lifestyle, there truly is no shortage of activities to keep any student occupied. Ashton College is proud to be a downtown resident of such a spectacular city like Vancouver. We encourage all prospective students to come to Ashton College and complete your studies here and experience all Vancouver has to offer.